Back in early 2017, when I was in Kenya, the Kenyan government made an important announcement – that a total ban on single-use plastic bags would be enforced, and it would take effect just a  short time later. And  I will admit, I was definitely sceptical, thinking ‘yea, right’!

However, much to my surprise and true to their word, the government indeed proceeded with the ban  … and just like that, there were no more single use plastic bags!  It became known as the toughest ban on plastic bags in the world, and included an astronomical fine slapped on anyone caught carrying these bags.  They also promised they would start random checks throughout Kenya, starting with the arrivals hall at Jomo Kenyatta International Airport in Nairobi.

I arrived back into Kenya a few months after the ban was imposed.  The previously plastic-littered streets of Nairobi did seem a little less cluttered somehow, but I still wondered just how stringent this law would be, and who would actually take notice.  That was until I went to the supermarket the following day, and was told there were no plastic shopping bags anymore, and was offered a cardboard carton as an alternative.   I must say I was impressed!   The government had followed through with the law change, and this coming from a developing nation where all manner of rubbish had previously littered the streets, and had sounded a near impossible task,  was even more impressive to me.

The fruit and vegetable market vendors took a little longer to adapt I discovered, for they still produced the same flimsy plastic fly-away bags they had always used and even when I questioned them about the ban, they just giggled.

When I came back to Kenya 6 months later however, I could see the abolishment of single use plastic bags had already made a big impact on the environment.  No longer were the streets littered with plastic bags, the main streets in Nairobi were devoid of flying plastic and the rubbish was minimal.   This time round, going to the supermarket to shop for my arriving guests, I was able to purchase fantastic biodegradable reusable sturdy bags for a very minimal cost.   And most impressively though were the market vendors who had now adapted and instead of sneakily using plastic bags as they had done previously, were using multi-use paper/cloth type mesh bags.   There was actually not a plastic bag to be seen!

As had been warned previously, part of the enforcement would include random checks conducted throughout Kenya with a huge fine imposed if caught with a bag, and In fact you can even go to prison!    These checks are carried out anywhere, at any time.

Now it’s over 12 months since the abolishment and I cannot believe the difference this has impacted on Kenya’s environment… already!  It’s incredible that in the short time this law has been in force, the magnitude of rubbish has diminished considerably.  I’m just amazed.

Of course, in some of the outer lying slums, and rural villages, the communities are taking a wee while longer to adapt … when you’re struggling to find the next meal to feed your family, the plastic bag issue isn’t high on the priority list, but the country is getting there, in leaps and bounds!   The waterways are noticeably clearer, the streets are cleaner, and the environment is benefitting.  It’s a start – and it’s wonderful! 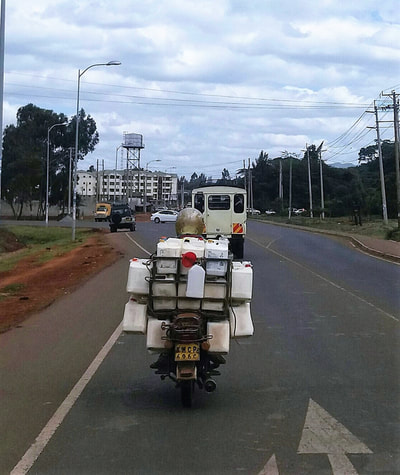